240 Million Slaves Ago...encompasses not only the African experience in the Caribbean and the Americas but all forms of slavery all over the planet Earth from the first bound living creature in my way of thinking.

The initial project started out with me thinking I would depict the map of New Amsterdam in 1653 and the lives of the slaves who were there.  Then I began to research New Amsterdam and New York during that century.  Whew! It was hard to do and I was driven to and from the research by the information I was reading and the pictures I saw.  Other forms of slavery and being bound by another living creatures were exposed to me in a way I had not thought of recently.

Upset I began tearing fabric strips and pulling scrap strips from my stash then sewing batches of same color fabrics together.  The end result was that by the time I had built enough fabric to make the quilt I had calmed my spirit and the anger at the historic documentation I found was dissipating.  It took working on the entire quilt from start to finish, small one inch or less strips sewn together, cut, reshaped, cut, sewn, arranged and rearranged to end the anger and to find a sort of peace with my fellow man. 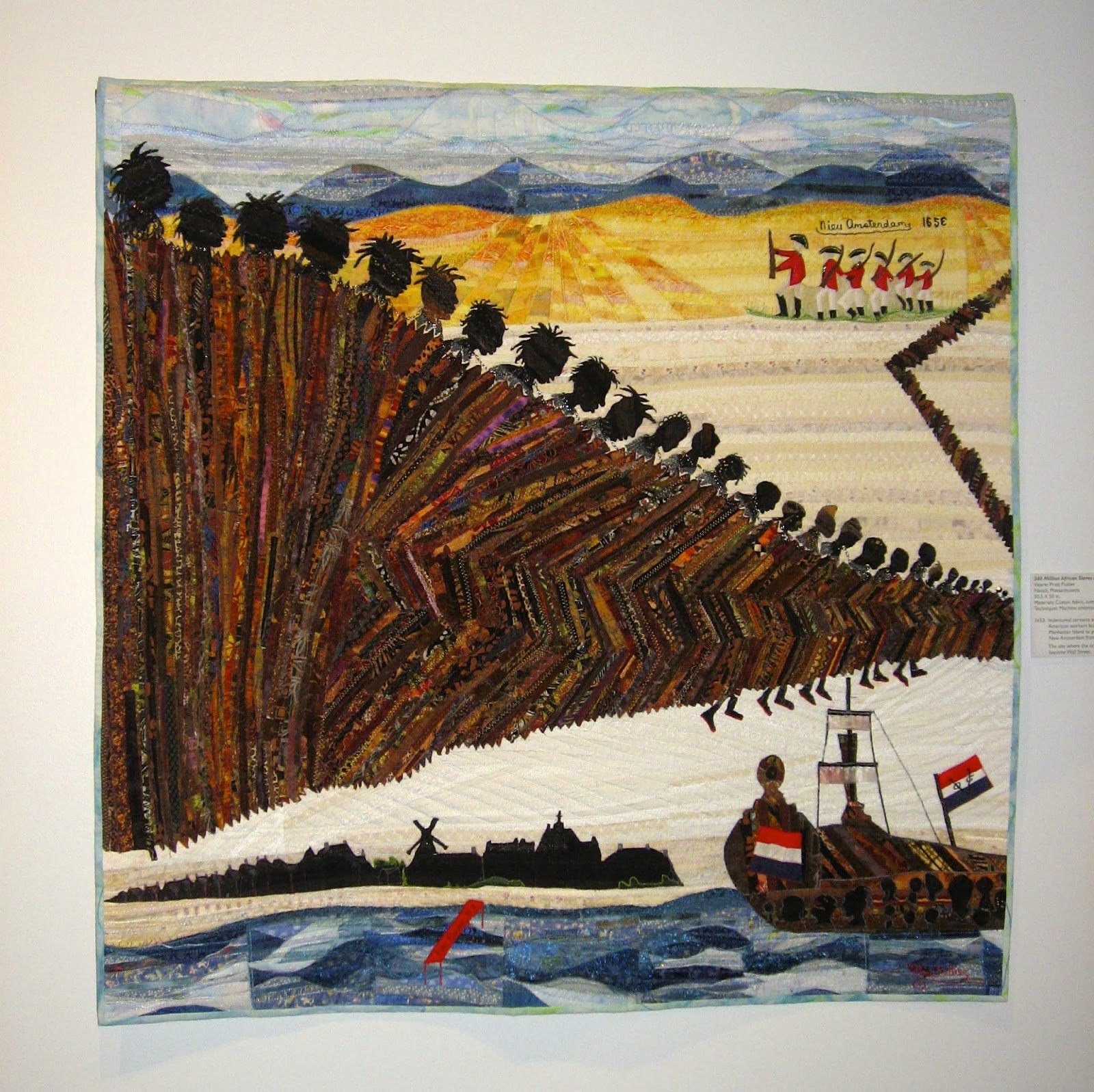 What started out as a wall became the bodies of the slaves, then I needed faces and bodies, the bloody feet, the Dutch slave ship, the town of Amsterdam, the British who were about to invade, the pier Eleven that still stands today that the slaves came to what later became New York. The quilt was made using strips of fabric for all parts, and they were less than one inch wide, even the faces were cut from strips of different black prints.

If you can go to the National Underground Railroad Freedom Center before it comes down in March. The artistry displayed in that exhibit is breathtaking. 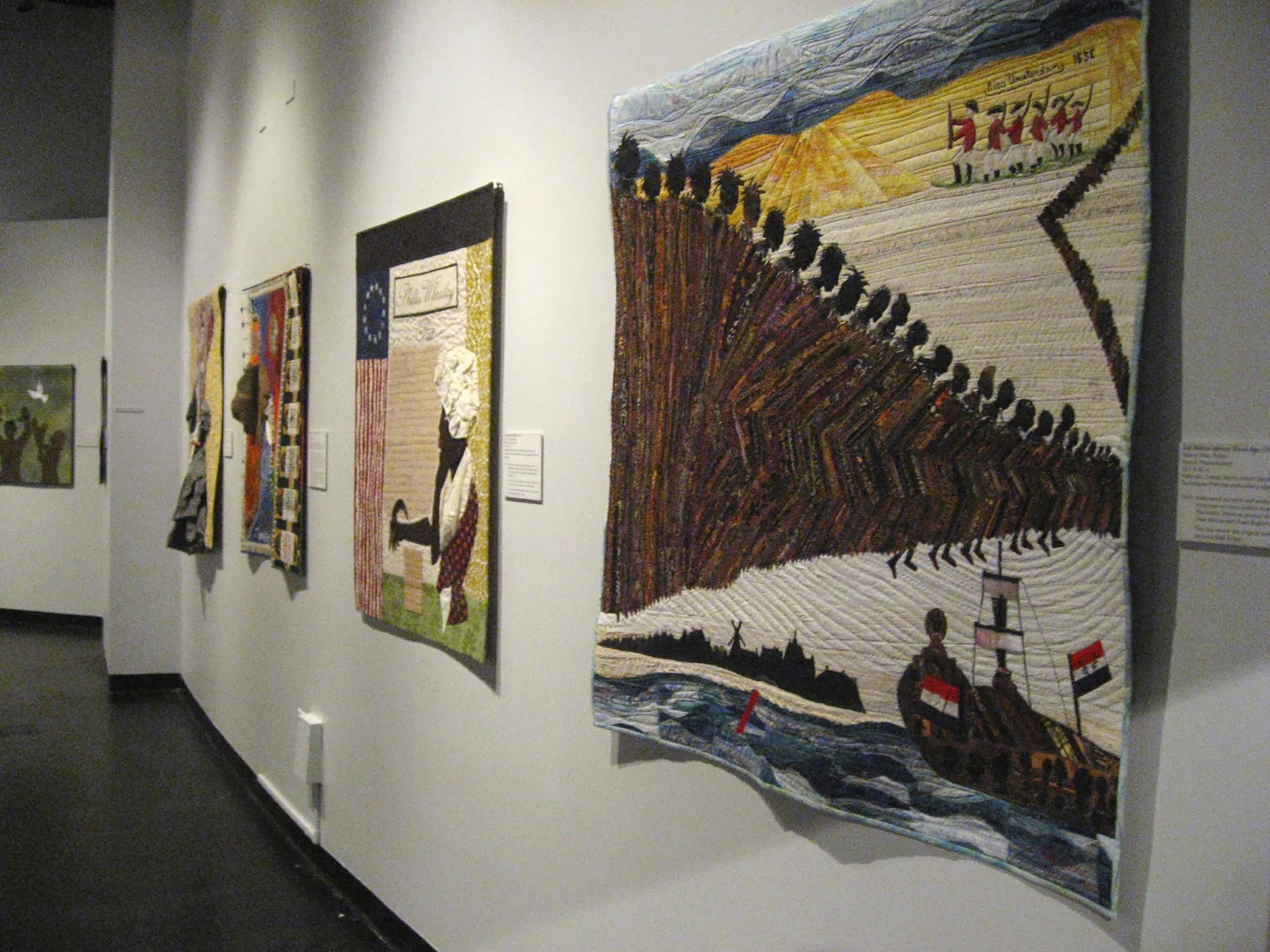 Below is a shot taken after the seven artist panel as we were leaving the auditorium by one of the other artist's husband. 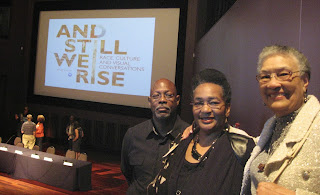 Evidence of the Diaspora

And Still We Rise...

Link to the Poster for the Exhibit, opening October 11, 2013 in Cincinnati, Ohio

In every keystroke that sails across the internet
I see My People spread out and connecting before me as never before
I wondered where my village was, I thought myself alone in the ethos
I am found and am being reinforced by each unseen stitch, each seen keystroke 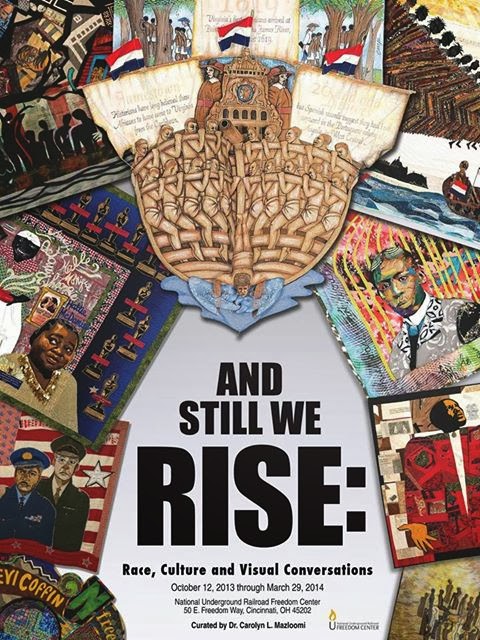 We do exist outside my prayers
We are talented, strong, amazing, and spirit filled
What a blessing to stroke the keys among you
We are empowered and refreshed for the days to come
Dare I say the battle yet fought

We represent a singular achievement of our ancestors
Griots, look we, we stand taller today
We appreciate from whece we all hail once again criss crossing the globe
We remember and sew their stories, their songs, and our DNA into our works
Many of us have walked not only in their footsteps but humbly, along side them
For sure we carry the burden and the glory of teaching and leaving those lessons for future generations

The soldiers in the Diaspora walk many singular pathways towards rejuvenation
We salute you Dr. Carolyn Mazloomi for this stage where in unity we are threading our needles and
Stitching our stories, our truths so proudly
And Still We Rise…Opening in Cincinnati, Ohio, this October 11, 2013 at 6:30 pm. Go to the website of the museum to see further details, or click on the link at the top of this message.

Congrats to all who helped to make this possible, museum affiliates, artists, family members, mentors, supporters, friends and thank you so much for giving us this opportunity.