Trials Tribulations and Temporary Lodgings of Nelson Mandela as it was displayed in JoBurg, South Africa.  During the Month of July at the International Quilt Convention of Africa. 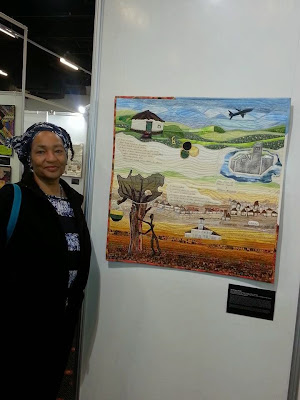 240 Million Slaves Ago...completed 2012, on Exhibit at the National Underground Railroad in Cincinnati Ohio.  It will leave there after Labor day 2014 and move on to one of its next locations somewhere here in the US.  I will post it's location asap. 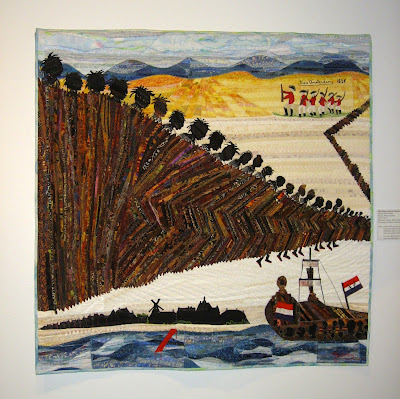 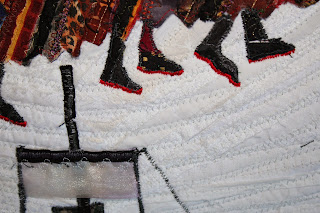 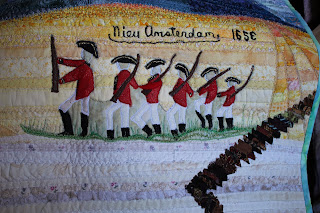 Details found in the quilt.  This quilt is presently in Winchester, VA at The Museum of Shenandoah Valley.

This is its fifth stop on a museum tour around the country. September 2016. 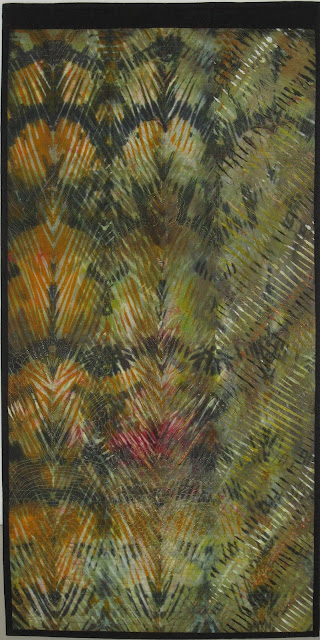 Detail﻿s below before the quilting. This is after washing, folding, pole wrapping, dyeing, washing, overdyeing, then washing...washing my goodness took most of the time, of course afterwards I pole wrapped one last time and using fabric paint I sponged the far right to bring the colors to a level seen on the far left. 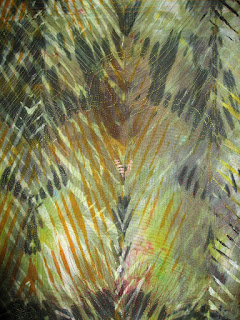 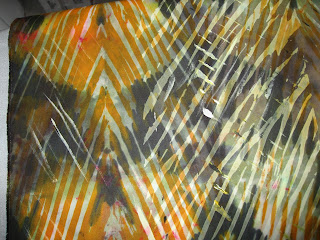 
I am constantly drawn to the face. I see them in the clouds, the folds of fabric, in the branches of trees, flowers, grasses, everywhere I see the face.  I have begun capturing different expressions and am enjoying the journey. 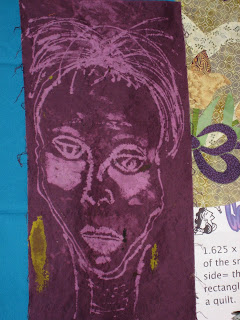 Commercial fabric, used dishwasher liquid to release some of the color. 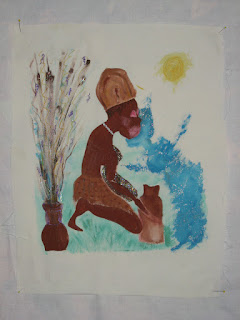 Painted on Muslin, in the Que waiting to be quilted. 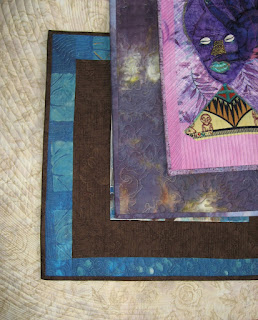 Examples of dyed fabrics and bindings 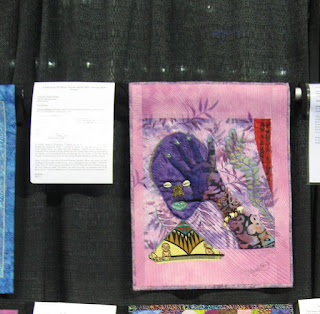 Hanging at the International Quilt Festival in Houston, TX, it has a different name but most often I refer to it as the one with the hand in it. 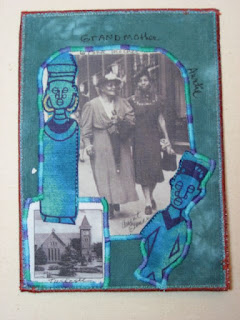 Postcard Swap, Great Grandmother Willie (born before the end of Slavery).  She and her husband were under ten when slavery officially ended; Great Aunt Eunice her daughter walking on Market Street in Philadelphia. This photo was taken before 1945. The building, lower left, was Tuskegee Institute, now University where three of the youngest, of my great-grandmother's nine children attended school.  Eunice or E. Finch Morris, as she insisted on being called attended before relocating to Philadelphia.  My mother took us to meet her.

This was drawn and painted on fabric as part one of a series made after doctor visits, done immediately following a GYN appointment. 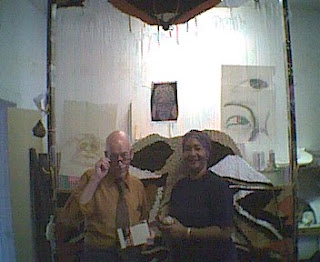 My Dear Professor Haymaker.  He encouraged me to enlarge my work from 8 1/2" x 11" to 8x10 feet.  The weaving behind us is one of three I made during our time together.  I often start small but end up five to ten times larger. Below is a shot of the mid section I was trying to figure out when the photo above was taken.  I had sketched a number of eyes and noses until I got the one that felt right. 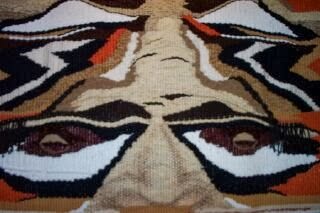 Above it a 8 x 10 foot weaving, well just a portion of it.  I built the standing loom then wove three pieces on it.  I am hoping to one day make the quilted version of all three so they can hang together. The quilts will not be quite that large. 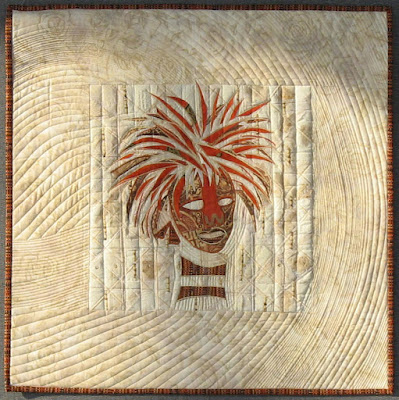 Bad hair day, not anymore.  I created the square behind the face, of paper, thread, crystals, glue and fabric.  Later this mask required a backing and the cream fabric square felt just right.  As I completed the appliquéd of face, hair, then necklace I realized it needed to be larger so I added the boarders.  The quilting is the first overall machine quilting I completed after I got over the fear of machine quilting.  Oh yes, I was nervous about it for years, finally taking the plunge after a session with Juanita Yeager.  So it doesn't matter if you can draw, sew, paint, or fussy cut. There are things that have us stumped...until we gird up our loins and punch through or pop the bubble. 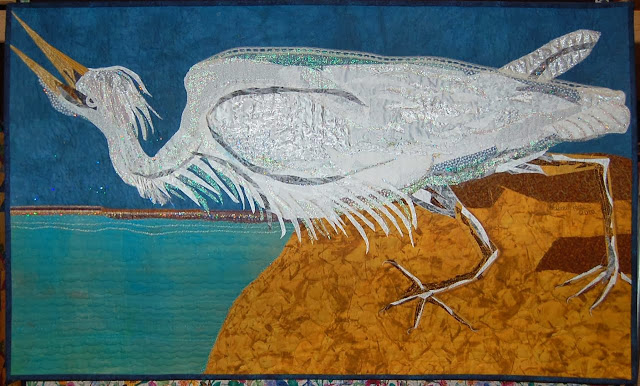 This quilt has a sky that was hand dyed, hand painted water, commercial hillside, fancy dress fabrics in the bird, was created, modeled after and to honor the 200 anniversary of Audubon's landing in Kentucky and was exhibited along with the bird below in a gallery there. Juanita Yeager was the Curator of the exhibit. 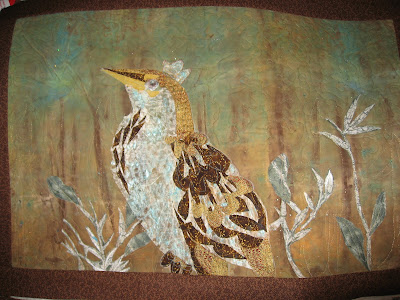 My dear friend and Show and Tell partner.  I use this piece to demonstrate the way some quilters show their work.  After the demonstration we all laugh at ourselves and having gotten the point do a much better job at introducing ourselves and sharing one of our art works with our audiences. 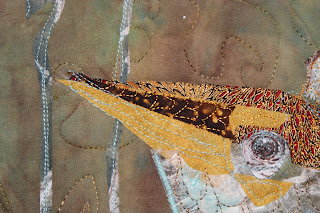 Detail of my Show and Tell Bird. Working on my design board. 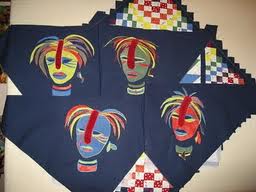 Part of my addition to a Round Robin I participated in.